The reason why I’ve hated wearing a bun since I cut my hair is because my bun always looked so tiny and messy. I guess the short curls that couldn’t quite reach to get pinned up would frizz up throughout the day.

I was watching TiaShauntee’s Bun Tutorial and realized that she used a bun maker! ..well, she used a makeshift one out of a sock. That’s probably better because I’m sure it’s softer than this one. I love her YT videos because they’re short and to the point. No long talking. 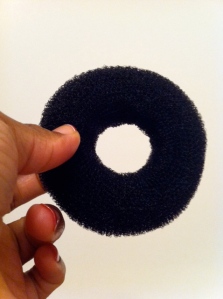 I’ve had one of these for a very long time (from early in my relaxed hair days), but rarely used it. I used it when I graduated from nursing school so I can have a nice, full bun. It was a bit difficult to do with my relaxed hair because it was so thin.

Anyway, I tried it the other day and absolutely loved it! I’ve even had a bun this week thanks to the bun maker!